The Truchard family wine tradition began in the U.S. over a century ago. In 1887, Jean Marie Truchard emigrated from a small town outside of Lyon, with his brother, Father Anthony Marie Truchard, a Catholic priest. Together they established a vineyard and winery on a 500-acre plot of land in Southeast Texas. During that time, phylloxera was devastating the vineyards in Europe. Although no formal records exist, it is possible that Jean Marie and Anthony left because this root louse caused the grape vines in France to quickly shrivel and die. This may also have influenced the brothers to plant a more disease-resistant grape called Herbemont that was originally grown in the northern part of Africa, a French colony at the time.  In those days, Texas was recognized for viticulture, given its “can-do” spirit and local botany knowledge. Despite these facts and their best efforts, the Truchard winery, founded just outside Houston, did not survive prohibition or the Texas heat; however, the old barn that housed it still stands today.

Fortunately for the family, Jean Marie left something much more important -- his farming legacy. Soil ran deep through the Truchard bloodline.   Although the vineyards were converted for cattle grazing, Jean Marie’s grandson Tony eventually inherited his love of farming and pioneering spirit. Born in Texas along with his six brothers and sisters, Tony was taught at a young age how to cultivate the land in the same tradition. Like most children reared on a rural farm however, he yearned to escape to college and enrolled at the University of Texas Austin. Subsequently, he decided to go to medical school at the University of Texas Southwestern Medical School in Dallas.

In August of 1963 just before starting medical school, Tony attended a dance in La Grange, Texas, where he met Jo Ann Wessels who was there with her parents.  After dating for a year, they were married and upon graduation from medical school, Tony enrolled as an officer in the army to pay for his medical education.

In 1972, Tony and his wife Jo Ann received orders to move to South Korea. He had planned to bring their growing family of five along with him but fate intervened. Jo Ann, who was 8 ½ months pregnant at the time with their fourth child, slipped on a grape while grocery shopping and broke her knee. Given these circumstances, Tony’s commanding officer, reconsidered and stationed them at a base in Herlong, California instead.

In October of 1972, Tony, Jo Ann, and family arrived in Herlong and had to report to headquarters at the Presidio in San Francisco.  After the meeting, Tony suggested taking a drive through the Napa Valley.  Upon seeing all the vineyards, Tony thought it would be interesting to buy some land, plant a vineyard, and then return to Texas to practice medicine.  He used his savings to purchase an abandoned prune orchard in Carneros, a region in the southernmost part of Napa that was mere pastureland at the time (The word “Carneros” is in fact Spanish for sheep or ram, which were the predominant farms in the area).

The site looked ideal with 20 acres and a perfect Southwest exposure, but Tony was intrigued as to why no one was planting grapes in this area, considering it was only 10 miles away from established vineyards. The local experts with whom he inquired all had the same response: it was too cool to ripen quality grapes, and, more importantly, the shallow clay hillsides made little ground water available for maintaining a vineyard. In Carneros, the little existing groundwater tended to be salty because of its proximity to the bay.  Since Napa traditionally relied on groundwater for irrigation in the 1960s and 1970s, everyone thought that the clay soils in Carneros would never work for a vineyard.

But Tony, never easily discouraged, enlisted a soil conservationist and developed a plan. The traditional practice at the time had been to use overhead sprinklers for watering. Since he didn’t have enough water for this method, he decided to use the clay soils to create reservoirs and trap the rainwater, then use it sparingly to grow the grapes. In doing so, he was one of the early adapters of drip irrigation, a practice that was used in Israel for desert farming but not known in California yet. With this approach, he discovered that the diverse soils and cool climate of Carneros made for grapes of extraordinary quality once the grapes received water. On that first 20 acres, he planted Chardonnay, Pinot Noir, Cabernet Sauvignon, Cabernet Franc, Merlot, and Riesling. 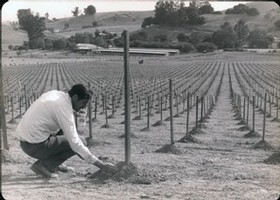 Tony’s persistence led him to become one of the pioneers of the soon-to-be Carneros AVA.  He continued with his profession as a physician and opened a private medical practice, in Reno, Nevada, where a high demand existed for doctors. During the week, he practiced medicine and on Friday evenings, Tony and Jo Ann would pack their six children into their Chevy Suburban and drive 3 ½ hours through the Sierra Mountains to Napa. All eight would camp out in a trailer while Tony and the two boys, John and Anthony II, would tend to the vines on Saturday and Sunday before returning home Sunday night.

Over the years, the Truchards slowly expanded their estate. Neighbors noticed Tony having great success with grapes and would approach him about buying their farms. Jo Ann, who was trying to raise six children, would quickly object to buying any more property. While Tony, not able to resist, always had to know how much they were asking. He was transforming pasture into prime vineyards, quite the opposite of the first Truchard descendent -- Jean Marie. Luckily for Tony, he’d found the right spot and land prices in Napa continued to trend upwards.

After selling their grapes to premier wineries for 15 years, the Truchards began producing their own wines in 1989 to great acclaim. To accommodate the winery’s increased production, in 1998, they added an 11,000-square-foot wine cave to the premises. Today, Truchard Vineyards produces Chardonnay, Roussanne, Pinot Noir, Syrah, Merlot, Zinfandel, Cabernet Sauvignon, Cabernet Franc, Tempranillo, Malbec and Petit Verdot all of which are estate grown.

The Truchard family has been farming vineyards for over 45 years and plans to carry on their legacy for many generations to come.  The health of their soils, the quality of their water, and the overall health of the environment are all essential to their long-term plan of growing a multigenerational family farm. They will continue to farm sustainably and use fish friendly practices for years to come.

What a difference a week makes! Same bunch of our

It's National White Wine Day!! Celebrate the day b

Veraison, on our 2022 Cave Block Cabernet! Such a

Bottling up some tasty 2021 Chardonnay this mornin

Join our mailing list to keep up to date on the latest wine releases, events and promotions.